Would the leaflet pictured below qualify as communalism? Or the opposite? The message is from Muslim Lib Dem councillor, Dawood Akhoon, and he is calling on Muslim brothers and sisters to vote Lib Dem. As his two Lib Dem colleagues in the Cazenove ward are both ultra-orthodox Jews, Ian Sharer and Abraham Jacobson, it is hardly what you'd expect in a propaganda leaflet aimed at Muslims.

But the person who sent it to Blood and Property believes it has a bearing on the debate about communalism. It is clear that this leaflet was not intended for general release - so does it confirm the views of Geoffrey Alderman that Hackney Politicians have to interpret the community along racial or religious lines? (for the opposite view: Abraham Pinter responds to Geoffrey Alderman)

Not sure if the photos below will be legible but the leaflet starts off with "Dear Brother/Sister in Islam" and goes on to say: "As Muslims and residents of Hackney, we have many challenges ahead both locally and nationally."

It ends saying: "We have always served and supported the Muslim Community and we are all committed to continue to do so."

Meanwhile Diane Abbott laments the days when ethnic communities stood shoulder to shoulder against racists. In a piece in the Independent she writes: "The other strength of the anti-racist movement of that era was that it was genuinely multi-racial. Black, white and Asian went to Southall to resist the fascists. Since then we have seen a regrettable fragmentation. First Asian people resisted being called black. Now Muslims, Sikhs and Hindus all insist on a separate identities. A distinct cultural identity is one thing. But the struggle against racism has been immeasurably weakened by the political fragmentation we have seen in past decades."

Could Diane's vote base be suffering from the same problem? Earlier this week her Lib Dem opponent Keith Angus claimed that Afro-Caribbean voters were deserting her - Diane has yet to reply to Blood and Property's questions on this.

But what about Hackney's African population? Are Nigerians still smarting over Diane's 2006 article: Think Jamaica is bad, try Nigeria? Christian Party leader, George Hargreaves has focused on British-Nigerian voters. Could African voter identify more with his Christian Party? Could Diane's voter base, as well as the anti-racist movement, be suffering from fragmentation? 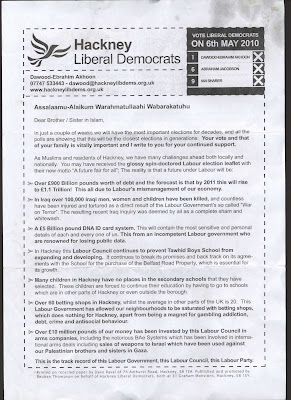 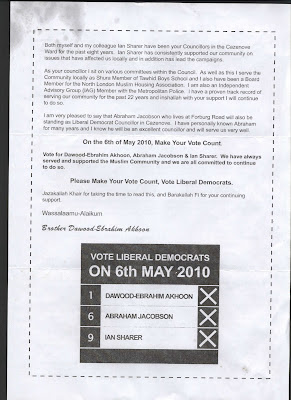 Posted by Blood and Property at 16:51